Today, I learned a new skill…. Sewing… on a sewing machine no less.

What, you ask, does this have to do with sound? Well, not much really unless you need something sewn and your wife is not around or in the mood to do it for you. She is rarely NOT in the mood to do me a favor, but in this case, she was not around. So, necessity being the mother of many things, I decided to learn how to use my  wife’s brand new sewing machine… with her permission, of course.

The learning process began with the DVD that came with the Brother Sewing Machine she had purchased and the production values were (shall we say) early 1970’s with voice over done by a Japanese woman who had a less than stellar command of the English language. But there were plenty of pictures and I could start and stop the DVD as often as I needed and trudged through the learning process, eventually becoming an expert.

You next question is what did I need so badly, that it inspired me to learn how to sew, on a sewing machine? Transmitter belt! You know those ankle, thigh, waist and arm belts that hold a wireless transmitter in place so an actor can “do their thing” without worry of the dreaded “My mic pack fell off in the middle of the scene”.

I made several passes at this project as seen in the picture below. With each pass, my technique, and understanding of the sewing machine improved. I made a Waist belt (it started out as a Thigh Belt): on that one I learned “measure twice, cut once”. Then I tried a Thigh belt: I learned that I don’t necessarily have to cut everything to size as long as I leave some elasticity in the belt. Finally I made ankle belt: I learned there are lots of other stitches that make my job easier and cover up mistakes when I don’t cut things perfectly… not to mention, folded edges, patchy looking Velcro and sketchy transmitter loops, were honed into finished edges; lots of Velcro to allow for multiple sizes in a single belt; tighter more practical transmitter holders to allow for two way placement (antenna up or down); and ultimately a fairly professional looking product.

The hours I spent learning and doing this project were more about the doing rather than the finished product. If I actually calculated the time I spent, versus the money I normally charge per hour for my services, plus the materials, I am sure I spent way more than if I had called TAI Audio and ordered what I needed, shipping included. But then I wouldn’t have this fun story to tell the talent, as I wire them up: “You have the pleasure of wearing a one of a kind Steve Baker Sound Guy original transmitter belt… made with these two hands.” Since putting microphones on talent is an awkward thing to do, it’s always nice to have a fun story to break the ice.

Tomorrow, I will make more belts to add to my ever growing sound kit. I’ve been thinking of some other ideas I can do with my newly acquired skill but would love to hear ideas you may have.

Here a look at todays work. Comments and suggestions are welcome. 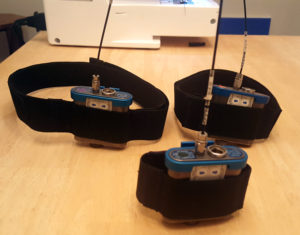 As always I look forward to reading your comments and hearing about your adventures in making sound.

Until the next time…. Sound Rolls… Steve Baker Sound  Guy